Composition of the Independent Liberal and Democratic Group (ILDG)

The Congress Connect is a database containing detailed and general information on all members of the Congress of Local and Regional Authorities of the Council of Europe. 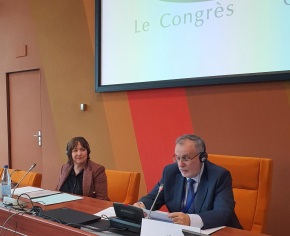 At its group meeting on 24 October 2022, the ILDG met with Senator Fiona O’Loughlin (Ireland), vice-president of the ALDE group in PACE and rapporteur on “A fourth Summit for a renewed, improved and reinforced Council of Europe”.

Welcoming Sen. O’Loughlin, ILDG President Marc Cools underlined the importance of contacts between the liberal groups of the Congress and the Parliamentary Assembly and invited the participants to reflect together how local democracy could be addressed at the summit, but also how the Congress and the Parliamentary Assembly could re-connect in a more efficient way to the citizens.

In her address to the group, Ms O’Loughlin spoke about the need to ensure Russia’s accountability for the war of aggression in Ukraine, but also about the urgent need for the member states to recommit to the Council of Europe values.  The summit could address the issue of democratic backsliding and give a strong impetus to the new generation rights, such as the right to live in a healthy environment.